Building on the Shuhada Foundation’s overall vision to create an integrated community facility to serve the Islamic community, McCutcheon Halley secured planning permission for a 3,800 sq.m mosque, a community facility with a 5-a-side playing pitch on the roof, a primary school and ancillary facilities including a halal shop, barber shop and restaurant on a former HSE site at Warrenstown House, Blanchardstown, Dublin 15.

The project brief was to create a high-quality response to the site’s characteristics and the surrounding area, and to the religious and cultural needs of the Shuhada community. It was important that the proposed development would not be overly dominant relative to the neighbouring land uses, would not have an adverse impact on the visual amenities of the surrounding area and that it would make a positive contribution to the architectural and cultural heritage of this part of Fingal in particular and west Dublin in general.

Acting as the Planning Lead and Project Coordinator, McCutcheon Halley provided strategic and project-specific advice and direction to both the client and design team to ensure the successful delivery of the application. The McCutcheon Halley team engaged extensively with the planning authority and representatives of Fingal County Council, to ensure that the design was planning compliant.

• Zoning – Aligning the development proposal with the site’s zoning objective;

• Design – Advising on the quantum of development relative to the size of the site;

• Layout – Recommendations on the optimum layout of the individual elements within the site to ensure the effective operation of the site and protection of local amenities;

• Traffic – Scoping the impact of the intensification of use of the site and consequent increase in traffic locally;

• Amenity – Addressing the issue of acoustic levels associated with the “call to prayer” and its potential impact on residential amenity;

• Landscape & Visual – Visual impact of development and in particular the proposed minaret (c.97m); and

Following a Notification of Grant of Permission, McCutcheon Halley responded to a number of Third-Party Appeals and also prepared a successful First Party Appeal to An Bord Pleanála. The conditions appealed related to:

• Retail Uses – The omission of the halal shop and barber from FCC’s Grant of Permission. Precedence and their status as ancillary to the main use of the site was successfully argued. Additionally, it was highlighted that the provision of halal to serve the Islamic community is a mandatory practice and that members of the Islamic community have specific barber requirements; and,

In making its decision, the board permitted both the halal and barber shops as ancillary uses and omitted the requirement for a development contribution. 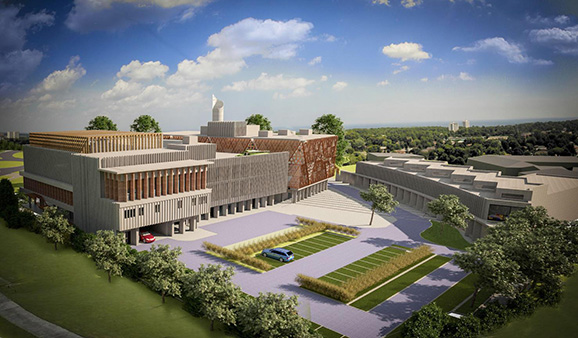