McCutcheon Halley acted as the planning consultant for a proposed mixed-use development at Shankill, Co. Dublin. The site occupies a pivotal position immediately north of Shankill Village and was formerly occupied by Supervalu and a number of independent retail units.

The development brief was to provide for a sustainable and efficient use of this largely vacant site, and to improve the range of services available to Shankill and its environs. McCutcheon Halley initially advised the Client on the appropriate mix of uses required to satisfy the zoning objective for the site which seeks to “to protect, provide for and/or improve mixed-use neighbourhood centre facilities”. To inform the range of appropriate uses, McCutcheon Halley undertook an audit of the existing social infrastructure available in Shankill and this was used by the Client in their decision-making process.

The proposed development comprised the demolition of the existing shopping centre to make way for the construction of a mixed-use neighbourhood centre encompassing a super market with a gross retail floor area of over 2,700 sq.m, a café, medical centre, pharmacy and child care facility.

Pre-planning consultation was critical to the successful outcome of the application and McCutcheon Halley engaged extensively with the Planning Authority to ensure that concerns were addressed.

Prior to lodging the application an information meeting for the community was held and McCutcheon Halley advised on the format and attended the meeting to assist with answering queries.

Dún Laoghaire-Rathdown County Council granted permission for the proposed development and it was subsequently appealed by third parties to An Bord Pleanála. McCutcheon Halley prepared the response to the Appeal and secured a positive decision.

• Mix of Uses – The scheme includes five uses that will promote both daytime and evening use, thus ensuring a diversity of use to promote the vitality of the site;

• Connectivity with Shankill Village – the site’s location, at the edge of the village, represented a significant opportunity to consolidate and enhance Shankill. The design incorporates a public plaza with soft landscaping treatment to the southwest, to form an improved physical and visual link with the village;

• Permeability – the site is an island surrounded by roads, existing pedestrian access points were retained, and two additional pedestrian/cyclist routes are incorporated in the design. Increasing permeability and connectivity between the surrounding residential areas and the village centre will provide easier pedestrian and cyclist access, thus aiding consolidation and ensuring the primacy of the village core.

• Design and Visual Impact – being an island site, surrounded by public roads, the site presented a significant challenge in terms of screening operational areas as all facades are visible. A balance was achieved through design innovation and utilising the site’s natural topography and a positive modern architectural response to the site was developed.

• Landscaping – the scheme incorporates significant tree planting to blend the development into the existing sylvan neighbourhood.

• Interaction with Road Improvement Scheme – A Road Improvement scheme was prepared by DLRCC, which includes an upgrade to the Shanganagh Road (R119). As part of the scheme a retaining wall was proposed immediately to the west of the application area. The proposed site layout has taken cognisance of the location of the retaining wall and it is accommodated within the design. This ensures that the proposed development does not compromise the road scheme. 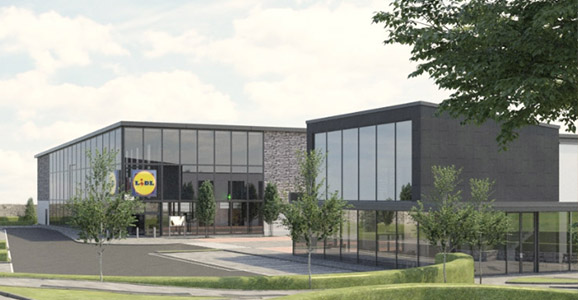