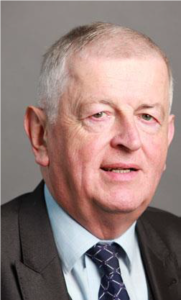 -Present
Studying for and Practicing Member of Bar Council of Ireland

Douglas Hyde is a qualified town planner, barrister-at-law and chartered engineer with extensive public and private sector experience in Ireland. In the early 1970’s, he worked as a civil engineer with ICI plc in the UK. Subsequently, he held senior roles in the Irish public sector, including chief planner, Douglas oversaw all the authority’s planning work including development management, drafting the first Fingal County Development Plan and presenting it to the councillors, preparing numerous Local Area Plans and environmental impact assessments. He has also held posts with Dublin City Council, the Department of the Environment & Local Government and An Bord Pleanála.

In 2003, Douglas was appointed as chief planning manager with the Menolly Group. He provided strategic advice on planning policy issues, appointed and managed design teams and guided major projects through the planning system. Having been called tot he Bar in 2013, Douglas practiced mainly in the planning and environmental law areas. He joined McCuthcheon Halley in 2016 and provides strategic planning oversight of major development projects. These projects include a series of Lidl retail development and a Lidl regional distribution centre in Newbridge, County Kildare; a rezoning proposal for one of Ireland’s biggest developers; a mosque; school and community centre development and major residential development proposals.

Douglas is currently overseeing the project management of a major planning application for a c.60,000 sq.m. distribution warehouse for Lidl Ireland GmbH. Douglas has led on the development of a planning strategy for the project and has overseen formal preplanning meetings and important stakeholder engagement.

Douglas actively engaged on several different projects for the upgrading and development of Greenore Port in Co. Louth. This included a warehouse extension project, provision of new open storage areas, new cargo loading/unloading and transfer facilities, and quay wall expansion/upgrades. this has extended to a number of detailed applications to Louth County Council and the management of subsequent appeals to An Bord Pleanála, where necessary. the quay wall application was the subject of a Strategic Infrastructure Development (SID) screening application to the Board. Recently, MH Planning  have successfully negotiated a reduction of over €250,000 in development contributions payable for an approved scheme, delivering a substantial cost saving to the client. The progression of port improvements is being advanced via close partnership working with planning officers in Louth County Council with the aim of delivering cross-cutting economic, social and environmental benefits for what is a very valuable piece of strategic infrastructure in the county.

Project Planner managing the preparation of major planning applications for residential development within the wider GDA region. Project management of phasing relating to amenity space, infrastructure and supporting services was integral to this role, as was aligning the individual EIA with the overall strategic level EIA for the project.